By Barry Holbrook: Joe ‘Juggernaut’ Joyce is predicting a victory by knockout over former WBO heavyweight champion Joseph Parker this Saturday night at the Manchester Arena in Manchester, England.

Joyce says he expects Parker could be on his bike on Saturday night rather than to stand and trade as he did in his last two fights against Derek Chisora. Parker has won his last five contests since losing back-to-back fights against Anthony Joshua and Dillian Whyte.

“We’re just ready to fight, and we want to get on with it. Fight night is coming up, and may the best man win,” said Joe Joyce to ID Boxing about his fight this Saturday night against Joseph Parker.

“I was friendly with him before. I met him in Vegas a couple of times. We’re going to be punching each other in the face and body on Saturday night. So we need to put that aside and get to work because it is a sport. It’s a brutal sport.

“Yeah, this isn’t about speed. I have timing, I’m experienced, and I’m tough and stuff. I’m not only tough and can take a shot and throw a lot of punches. There’s also more to my game as well.

“I think he’s going to be quick, technically good. He can take a shot, and his footwork and head movement may be hard early on. He’ll definitely be game, trying to nick the rounds.

“It’s going to be a really tough fight. He could be. He could try that,” said Joyce when told that Parker might be on his bike on Saturday night. “I don’t know exactly what his game plan and tactics are, but we’ll find out.

“I’ve got plenty of plans A, B, C, and D if he changes things up. It’s going to be a great fight, technically and physically. We’re both going to go at it to find out who is the best Joe.

“Let’s see what happens. All this talk and stuff is one thing, but actually, in the ring, we’re both going to be coming at it from great training camps, and it’s going to be fireworks and explosive and see who is the better Joe. This Joe by stoppage,” said Joyce. 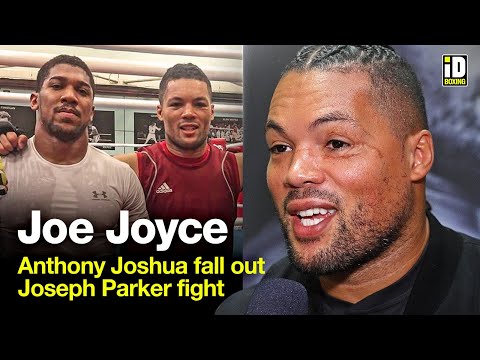